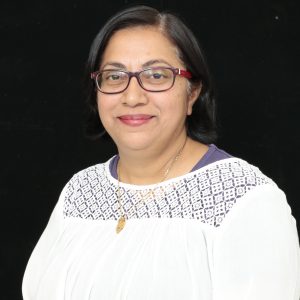 Ms. Bineswaree (Aruna) Bolaky is an Economic Affairs Officer with the UN Economic Commission for Africa (UN ECA) sub-regional office for Southern Africa, based in Lusaka, Zambia. Prior to that, she served in the Africa section and Least Developed Countries (LDC) section, of the Division for Africa, LDCs and Special Programmes at the United Nations Conference on Trade and Development (UNCTAD) in Geneva.

She has been a co-author of the UNCTAD Least Developed Countries Report and the Economic Development in Africa Report for the past 9 years. She regularly conducted interviews with journalists and has been featured in several tv, radio and press outlets, including, Radio France International, BBC Africa, TV5 Monde Afrique, the Financial Times, The Economist Magazine, Jeune Afrique and Le Monde.  She has worked in the United Nations for about 15 years in the areas of economic research, policy analysis and programme management in several duty stations. Prior to joining the UN, she was a summer intern at the IMF and worked as a consultant at the World Bank.

Her academic publications center on trade, tourism, competition law, regional integration and industrial development. She holds advanced degrees in Economics and Economics of Competition Law from the University of Cambridge, UK; Simon Fraser University, Canada; King’s College, London, U.K and the University of Maryland at College park, USA, where there she specialized in international trade, and development economics. She is a national of the island of Mauritius.