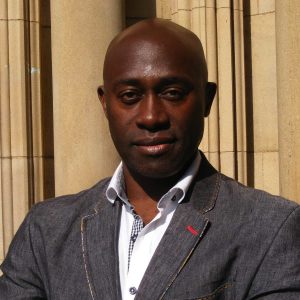 Born in Manchester, North West England, to Ghanaian parents, Henry Bonsu is a leading British African broadcaster. A Modern Languages graduate of Magdalen College, Oxford University, he has worked on some of the BBC’s biggest news and current affairs shows.

Henry has also presented programmes on satellite TV channels, and been an analyst on BBC News, Sky News, Al Jazeera and Arise News, ranging from international relations to race and culture, from business affairs to health and education. Bonsu started his career in the early 90s as a print journalist initially writing for African-Caribbean diaspora publications like The Voice, and the Caribbean Times, then for national newspapers like The Times, Daily Express, The Guardian and the London Evening Standard.

Henry is currently an international UN level moderator and Master of Ceremonies, specialising in business, economic development and the Sustainable Development Goals. As well as cultural and development events, Henry hosts major business gatherings like the African Banker Awards, African Business Awards, and the Global African Investment Summit. His corporate clients include Maersk, KPMG, Amaris and Cartier International for whom he has facilitated conferences and ceremonies on key issues ranging from diversity to sustainability.