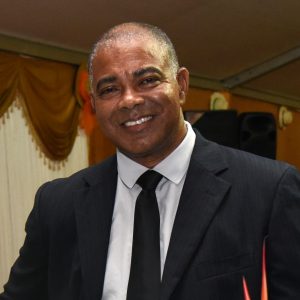 Mr. Jean Richard Payendee is the Commissioner for Environment. He is married and has two sons and a daughter. He was first elected in local region N0. 4 (Baie aux Huîtres) in February 2012. He was entrusted with the responsibility for the following portfolios: Environment, Forestry Services, Tourism, Fisheries and Marine Parks.
He was re-elected for a second consecutive mandate in local region No. 5 (Port Mathurin) during the regional elections of February 2017 and since then he has the following areas of responsibility: Agriculture, Food Production and Quarantine, Forestry Services, Environment, Fisheries & Marine Parks
He holds a diploma in Environment, Agriculture (at the University of Mauritius) and Kew Herbarium from England. He has worked as Forest Guard and Technical Officer in the public sector of Rodrigues. Ex-manager of the Mauritian Wildlife Foundation in Rodrigues, Commissioner Payendee is well-known at international level for his propensity for biodiversity conservation. His long years of experience in the environment sector and tourism, was the motive behind his nomination as Commissioner for Environment. As a Dive Master, Mr. Payendee is very much passionate in the marine fauna and flora.
The Commissioner is deeply concerned with environment protection and conservation and all projects geared towards making Rodrigues an ecological island. He is also passionate at diving and stress the imperative to preserve our marine ecosystem. In this context, he has been instrumental in the establishment of the following regulations geared towards the protection of our environment; Rodrigues Regional Assembly Octopus Closed Seasons Regulations 2012, Rodrigues Regional Assembly Prohibition of Use of Plastic Bags Regulations 2014 & Rodrigues Regional Assembly (Banning of Disposable Plastic Food Items) Regulations 2019.