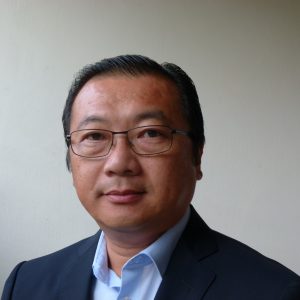 Jocelyn Kwok is since 2011 the Chief Executive Officer of AHRIM (Association of Hoteliers and Restaurants – Ile Maurice), the main professional association of private operators and lead spokesperson in the hospitality industry, liaising with Government, Institutions and the Media. In his capacity, Jocelyn Kwok is also involved with the main tourism bodies, namely as a Board member of the MTPA (Mauritius Tourism Promotion Authority) and a member of the hotel Star Rating Committee. He is also a regular co-chair of public-private sector meetings on tourism issues. As a member of Business Mauritius, he is nominated as a Council member of the Human Resource Development Council and the National Wage Consultative Council.

Prior to joining AHRIM, Jocelyn Kwok was the General Secretary of the Mauritius Chamber of Agriculture where he led industry positions with particular focus on international sugar trade liberalisation and local food production. From 1991 to 2006, Jocelyn Kwok was a Management Consultant at De Chazal Du Mée, acquiring the Partner status in 1998. He was Head of the Marketing and Economic Studies Service Line, specializing in socio-economic studies and market research surveys.  Jocelyn Kwok also had the opportunity to serve as Co-Chair of the first Maurice Ile Durable Fund Committee (2008 – 2010) and as Councillor at the National Economic and Social Council (2009 – 2014).